Himalayan Balsam is an Invasive Non-Native Species (INNS). With lots of hard work over the last decade, the Group has been steadily eradicating it from the Meadow and surrounding woodland. We will continue to do this as our main summer project.

Despite the COVID restrictions during 2020, the Group were able to pull record numbers of Himalayan Balsam, often as part of their daily exercise, as social distancing isn’t a problem for this kind of work! 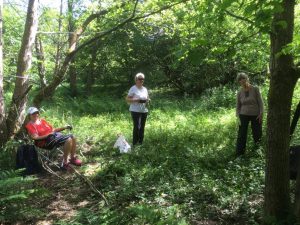 When the restrictions allowed, we met in groups of up to 6 volunteers, socially distanced of course! Here’s Jean, Margaret and Karen taking a break after a hard afternoon’s work! 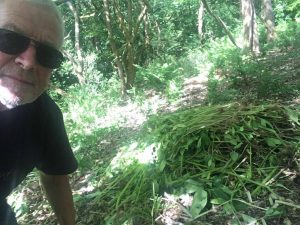 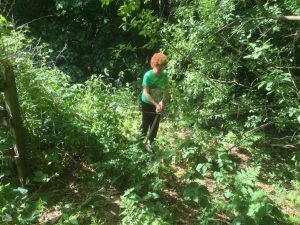 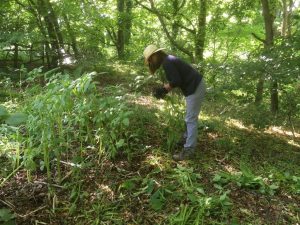 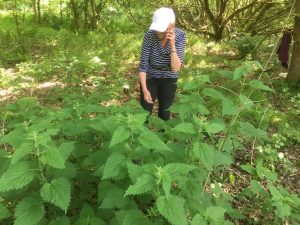 Wendy working hard and Kath pretending to be busy (whilst on the phone)!

In June 2019, the Group held a “Public Balsam Bash” where members of the public were invited to join us for our monthly workday. Six new volunteers came along and helped with the Himalayan Balsam removal, which made for a very enjoyable morning. 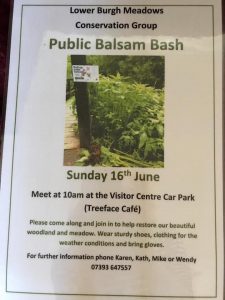 Take a look at some of the photos below, which demonstrate the Group’s ongoing battle to eradicate Himalayan Balsam in the woodland surrounding Lower Burgh Meadow. The Rangers at Chorley Council sometimes help us to strim a heavily infested area first, before the group moves in to pull the stragglers. We also make periodical visits back to other parts of the wood to check for any germination in areas we’ve previously pulled. Above left to right, Balsam present before and after strimming and then one year on, native growth returns

Group Members and friends attend the balsam bash day, resulting in a large area being cleared. The Group return periodically to pull out any stragglers.

Balsam Bashing over the years

Here are some photos from the hard work from over the years. Cold Stratification :- Seeds being subject to temperature below O°c will promote germination.

Himalayan Balsam is a non-native plant, introduced to Britain by the Victorians, in the late 1800’s.

Stands allow no light onto the ground and as such, most of our native wild flowers will cease to exist in these areas.

Single Plants, if left, will develop into large stands, estimated up to 600 plants per year (amount of seeds a plant can produce).

Eradication of Himalayan Balsam will allow our native plants to re-colonise and the natural balance of the area will return, increasing wildflower population, which in turn will increase insect life and subsequently increase all wildlife in the area.

Timing of methods may vary (particularly hoeing in April), depending on late frosts etc.

Seeds are viable for at least two years in the ground. Not all seeds from last year’s dispersal will germinate, due to not being at the right depth, light, conditions in the soil etc.

The group has observed that some seeds may be viable for three years or longer.

As the methods listed below are carried out, by the actual walking of the ground and as you pull up the plants you will be disturbing seeds to germination levels, which WILL grow.

Once an area is initially cleared, several more visits will be needed to clear the “stragglers” in the same year and up to three years thereafter.

Each plant can produce up to 600 seeds, projecting them up to 21 feet from the parent plant.

Balsam is an annual, which means the new areas of balsam you see each year grow from the seeds set from  the plants the year before.

When hand-pulling stragglers with unopened flower head, cut the flower head off, then cut below the bottom node, then place to pile. If these two cuts are not carried out, when piled up, due to dampness in the pile or rain, the flowers will continue to open and produce seeds.

When pulling stragglers with opened flowers, cut flower off and place to bag for burning, then cut below bottom node and place root and stem to pile. We have recently found that to crush the open flowers underfoot on hard ground will stop seeds developing.

Best practice for balsam eradication could be as follows :-

A) Survey areas throughout the year to determine where there are stands and which areas to work on first.

B) Clear bramble and bracken areas engulfed by balsam in the winter months, a rota of these areas would be best practice, to allow nesting birds and other wildlife to still be in the areas.

B) Each plant can produce up to 600 seeds, whilst walking pull individual plants, which will stop them becoming large stands.

C) Start balsam bashing at the highest land point and work down, on the basis that when seeds are projected by the plant up to 21 feet, they won’t go uphill as far as downhill.

Areas can be hoed as seedlings are two inches high at half an inch below ground level. For best results this should be done when dry conditions prevail.

Individual seedlings can be pulled, but cut root from stem, if damp or wet conditions prevail, the plant could easily set roots again.

During one year, a test area covered in seedlings (four square metres) was hoed – six weeks after hoeing only 20 new plants grew.

Strimming areas at this time may produce the same results and disturb native seeds to germination level.

The height of the plants by now are approximately 18 inches high and can be easily cut below the bottom node. Once cut, place to pile.

When pulling plants, twist the stems off from the roots and pile up.

Strimming an area will have the same effect, but will damage any native plants there. (These will grow again if perennials.)

Plants are three feet tall, continue to clear as in May.

Plants are now up to six feet tall and producing flower heads. As long as the seeds are not “pinging”, continue clearing as May/June .

If flowers are open, stack mass-cut or hand-pulled plants to piles, and jump on the pile as it gets larger. The jumping will crush the stems and flatten the flowers, making it harder for the plant to produce seed through dampness. Any seed that is produced will be localised for easy clearance next year.

This piling method is like a compost heap – heat is generated up to 140°F once the compost heap grows to 1m. square. This method is called thermophilic composting and is known to kill off weed flower seeds at this temperature, the bigger the pile the better, but we don’t know if it kills balsam seeds. The areas where piles are made do have balsam growing the year after, but only a very small percentage of what was there previously.

If pulling individual plants from a large stand and piling, fold the flower head under and place to the centre of the pile with the roots to the outer edge.

If pulling individual plants dotted about the area, best practice is to place the flower head in a bag for burning, and the stem and root to small piles as you move through the area.

The flower heads of any late stragglers can be cut off and placed in a plastic bag for burning. Disposal by any other method may result in transfer of plants to an other site, i.e. landfill site etc.) Then pull and cut the rest of the plant just above the root, below the bottom node.

Some balsam will grow very late in the season due to disturbance of the ground bringing seeds to germination level. In September and October you will find plants at about two feet high with no signs of a flowers whilst other plants as small as six inches high will have a single flower on them. These are the ones you need to pull as, if left, they will produce the plants for next year.