On advice from the Senior Ranger, plans were put in place for the Group to create a new Wildlife Hedge in a quiet area of the Meadow.

The group was successful in an application to ‘I Dig Trees’ to receive a delivery of 300 Parkland and Wildlife & Shrubs, which arrived mid-January and were temporarily planted during the January workday. The Wildlife and Shrub trees (consisting of Hawthorn, Blackthorn, Dogwood, Dog Rose and Goat Willow) will be incorporated into the new Wildlife Hedge, along with a further 400 trees now due to arrive in April, following an application to the Woodland Trust.

Take a look at the photos of our progress so far: 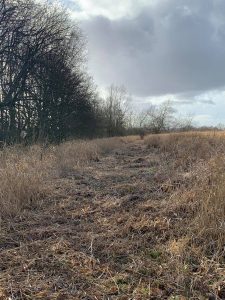 First strim by the Rangers at six inches high to allow wildlife to safely move away. 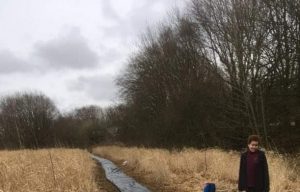 After closer strimming, the group raked the arisings and laid the geotextile matting, held in place with willow pegs which members had cut the previous week. 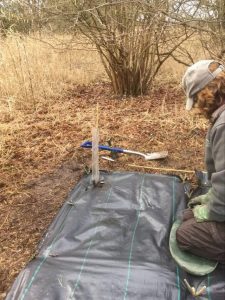 First tree of the wildlife hedge planted (Blackthorn). Canes and spirals to protect the trees were supplied by Ovo Energy through the “I Dig Trees” initiative. 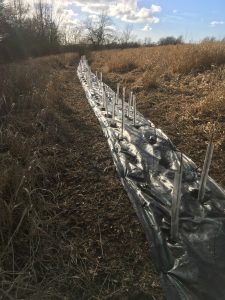